A Guard Dog Trainer Taught Me About Horses’ Eyes 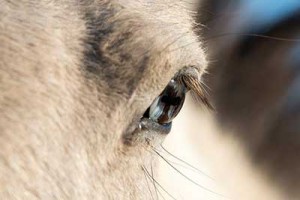 The guard dog trainer was watching a young excitable horse who was being a bit cheeky while being lunged. The man had previously told me that he had very limited knowledge about horses so I was explained that the horse was not naughty, just being a bit fresh and playful. I explained that once the horse had the initial play then he would be fine to ride.

The dog trainer replied “Yes, I can see that in his eyes”. I knew I should listen as I could learn from this man. He went on to explain that although all animals were different, they have very similar expressions in their eyes.

He explained that he liked a soft kind eye, the type of dog who thinks that being a guard dog is a game. The type of dog that can play with the kids but on command can also be very protective of them.

A mean nasty type of dog who hates the world can never be trusted. They have had bad experiences with people and do not trust them. They are the type of dog who can turn on the trainer and attack them without a moments warning. These dogs are dangerous and they take a long time to train and gain any confidence around.

This one conversation taught me so much about horses’ expressions. Although this knowledge carried on into the horses’ body language, it is always the eyes that give you the true meaning of the way the horse is feeling.

There are times when a horses’ body language can conflict with the eyes. Think of a situation when someone has reported to you that the horse was ‘just standing there and then he went beserk’. Had they looked at the horse’s eyes, they would have seen that the horse was frozen in shock and then the slightest movement or noise pushed them to the point where the horse did everything they could to get away from what they were terrified about.

When you are loading a horse to travel, does their eye tell you that they are genuinely worried about moving into a dark enclosed space, or do they have a large smile, very quiet eyes that blink confidently while they simply say “make me”? They training and consequences for these two horses are vastly different and a good horseman will know the difference by looking at the horse’s body language, which includes their eyes.

Does your older, beginner type of horse have a kind, knowing expression that they understand they need to look after this beginner rider even though the rider is likely to balance on their mouth occasionally and land a little too heavily on their back? If a horse shows a worried expression in their eye when a rider is not well balanced, they are also telling you that they are not confident enough to have a beginner rider on their back.

Does your show jumperlove the game they are playing? When they see a jump do they draw towards it focusing on the take off point with lots of eagerness and ready to spring into action over it? They may even hump up on the other side, still with a playful expression in their eye. However if a horse has a worried expression in his eye and rushes over jumps and away from them, he could be a dangerous jumper. This type of horse can panic under pressure instead of using a clear head to get them selves (and their rider) out of trouble.

A great dressage horse is not one who goes through the movements in a dressage test like a machine, with sunken eyes and a dull depressed eye but one who is ready to play. They will listen to the slightest signal from the rider to do the next game and although they may occasionally anticipate and get it wrong, they love the game . . . the rider asks the questions, they know the correct answer by giving the correct movement and then they are given an immediate reward. Watching a horse who loves to communicate with their rider like this is a joy.

The next time your are down at the stables have a look at your horse’s eye and let them show you the type of trust they have in your partnership.

May you always have wonderful communication with your equine partner!