The Horse’s Point of View 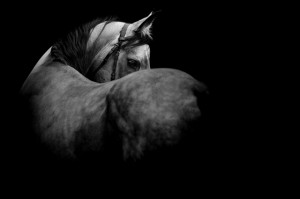 Sometimes you just need to look at things from the horse’s point of view.

“My horse just won’t lead in the trot”

Could be that he is happy to follow you in the walk because he is confident and there are no confusing messages.

But then when you start pulling on his head and jumping up and down in front of him or waving your arms around, he gets worried about the extra pressure on his poll and mouth.

He then has to put his head up in a defensive position so that your newly growing limbs won’t hit him around his eyes.

“My horse just won’t stand still when I mount”

It may be that because he is not well balanced and well prepared he finds it easier to move his legs to counteract the weight as you scramble up.

Other times it also could mean that as soon as you are mounted, there is no time to relax.

If you are a fairly active and demanding rider, then he may move off as you mount so that he is ready to meet your requests.

“My horse is hard to catch”

Could be that he is not confident with humans, or with you?

What has happened in the past when you catch him?

Do you take him to a quiet place to feed him away from other horses, or reward him in some other way?

Or do you make demands of him immediately so there is no time for him to build up a bond with you?

Horses generally try to please, but they need some form of positive reinforcement when they have given you what has been asked of them.

Often that positive reinforcement can be to stop asking and demanding and simply allow them time to understand that you are happy with what they have just done.

Sometimes if you think that your horse is not doing something you have asked of them, you just need to look at things from the horse’s point of view.