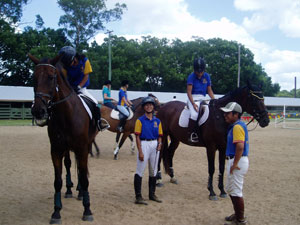 I remember the first time I taught Doris. She was a middle-aged woman, not particularly athletic and a little overweight.

Her first three lessons were cancelled at the last minute so when the fourth lesson came around I was almost surprised that she turned up.

She took ages to get ready and the lesson time was half over when she was eventually mounted.

I knew that she was scared.  Her breathing was rapid, she was shaking and her acknowledgement of hearing my questions was non-existent.

I talked calmly to her about the horse she was riding, told her a couple of stories of other riders he had helped and just kept chatting to her in a one way conversation.  Eventually she started nodding and communicating when I asked her a question.

After another ten minutes or so (and after I had asked her quite a number of times) she said that she was ready to walk on.

As the horse took the first step, she started to go into fetal position so we stopped.  Over the next 20 minutes or so this was repeated a number times until we had progressed about half way around on a circle.

When she dismounted, the tears were streaming down her face.  She had overcome her fears and had actually ridden a horse!

Doris only had a couple of lessons, and finished when she learnt how to trot.  That was her goal . . . to ride a horse  . . . Goal accomplished!

Every one has a different reason for riding.

Lesson plans for beginner riders are fairly standard but they are not written in stone. Lesson plans/ training plans are outlines only and should be flexible and adapted to suit the rider and the environment