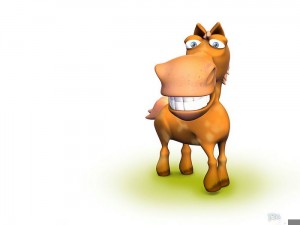 Price is always a consideration when buying an asset for a business.  So when his owner told me that he was selling him cheap because he won’t ‘tuck his head in’ and he throws his head around even after his teeth has been attended to, I
was interested.

His mouth and back seemed fine so the next step was to ride him.  Sure enough, as soon as he started to go forward with a focus on energy, rhythm and tempo with a few bending and flexing exercises then he responded positively.

As I said . . . we have a lovely big chestnut school horse called Sunny.  We were able to buy him at a very good price because I recognized that the throwing of his head was a response to him not being ridden correctly.

The way he was being ridden was the real problem.

Horses communicate in all sorts of ways. If your horse (or your student’s horse) starts to give some uncharacteristic behavior, then look for the real problem.